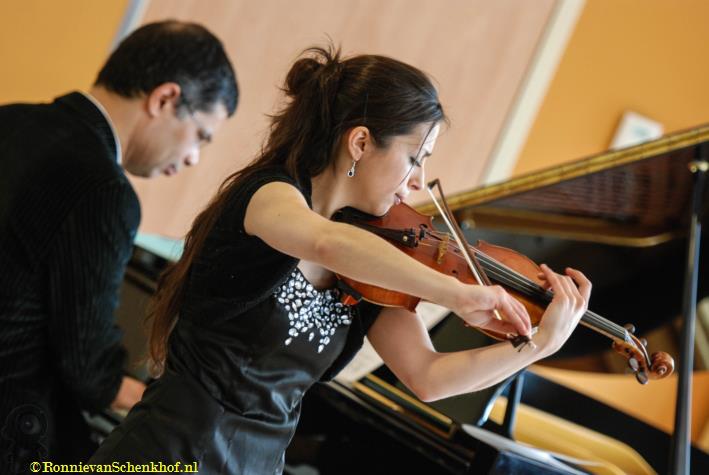 Since the age of 11, Laura has performed in many stages in Spain and The Netherlands. But especially since 2004 (Bachelor studies in Barcelona), playing together with piano became her biggest passion, while receiving lessons by professionals in this field.

Her first Duo (with Olga Domínguez) won the first prize at “Castellterçol’s Chamber Music Contest” and was selected by the Catalan Government to give a serie of concerts in Barcelona. From 2007, Laura has been performing together with professional pianists as Marc Torres, Olga Kharitonina, Carles Puig and Roderigo Robles.

Music brings people together; it opens our hearts and minds. This concert combines music of two different cultures that were once put together and are still finding out how to get along with each other: Catalunya and Spain. Two nations, two languages, different traditions, different ideologies, wars, conflicts… Aiming specially to spread the music of composers from Catalunya, this concert includes also Spanish composers’ work. Two cultures together, in contrast with each other; all reflected through the music.

After 40 years of Franco’s dictatorship in 1978, a new constitution with its new political framework was offered. One of the major issues they were facing was the national question, particularly in Catalunya and País Basc; a remaining question in the present days. I. Albéniz, F. Mompou, X. Monstalvatge, E. Toldrà and Pau Casals are some of the classical music’s items coming from this land. Eduard Toldrà (born in Vilanova i la Geltrú) was a conductor and composer and one of the most important figures of the musical context during the mid-twentieth century. 2012 was the 50th Anniversary of his death. No better reason to include his “Six sonnets for violin and piano” (1921) in the program.

REPERTOIRE: here you can see some of the works that form part of this project.