Laura Rafecas and Maria Sofia Espiga (viola) joined the Gospel event in Bremen, a special gathering of around 1300 singers, and 4000 people in the audience.

Laura played with Roderigo Robles and with Cuarteto Lorca during the “Dag van de Romantische Muziek” in The Park in Rotterdam. The beautiful day and an audience of over 40.000 distributed over 5 stages made the day a wonderful experience. 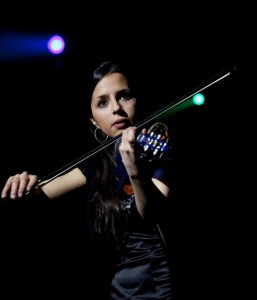 Laura Rafecas performed as a solist with “Limburgs Symfonie Jeugd Orkest Amikejo” in the concert “Festival America!”.
Playing electric violin solo on a special arrangement of “Kashmir” (Led Zeppelin) with the Introduction and the solo violin part written by Laura.

One of the coming concerts of the Duo’s Agenda will take part in a serie of three concerts a year, organized by “Stichting de Verrassing”. The concerts take place on three sundays, close to Holten.

The Duo succeeded the Audition process of this organisation, through which a few ensambles are chosen to perform around the Netherlands. The concerts will be anounced in October.

Graduated in her MASTER IN PERFORMANCE.

After succeeding with her Artistic Research (April 2011), Laura’s Final Recital took place on the 30th of June, 2011. Together with the pianist Roderigo Robles de Medina they played L. v. Beethoven’s “Kreutzer” Sonata (no.9 op.47) in A Major and Richard Strauss’ Sonata for violin and piano. The commitee remarked the musicality and heart of her playing (Mrs. Vesna Gruppmann was brought to tears during the playing) and had very nice words for Laura, saying that they forgot they were attending an exam and that “four years ago she was a student; now she’s an artist”.

Laura has an endorsement with RAYSLAND (music shop and studio in Holland). For more info: http://www.raysland.nl/

Laura recorded the strings (except the cello parts) for Mihai Puscoiu’s new album. They also filmed a few videos, with some extra musicians. You can find the whole CD at Spotify: Mihai, The Journey.