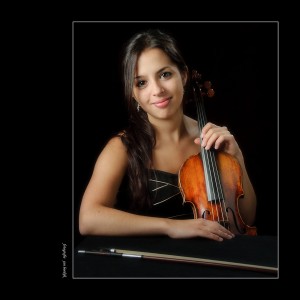 Laura Rafecas (Vilafranca del Penedès, 7th of January 1989) begins her music studies in Vilafranca at the age of 7, combining them a few years later with private lessons with Mr. Evelio Tieles.

She is admitted at the age of 14 at Conservatori Superior del Liceu (Barcelona), where she studies under the supervision of Evelio Tieles, and graduates in the Bachelor in Music at the age of 18 years old.

In 2007 Laura is admitted at Codarts, Hogeschool voor de Kunsten where she studies with Christiaan Bor (2007/08) and Benzion Shamir (since 2008), graduating in  her Bachelor in Music Diploma at the age of 20 years old and in June 2011 graduating with a 9.0 in the Performance Master, being given an excellent review of her interpretation and level from all of the committee members, remarking her expressivity and sensitivity, which brought one of the members (Mrs. Vesna Gruppmann) into tears. In this Final Recital the repertoire was Beethoven’s Kreutzer Sonata (on which Laura based her Artistic Research) and Richard Strauss’ Violin and Piano Sonata.

Since she’s 14 years old, Laura has performed in auditions and concerts, especially in violin and piano duo formation, in different stages around Catalonia and the Netherlands. Some of them:

Since 2007 Laura Rafecas is a member of Codarts Symphony Orchestra, performing mainly in De Doelen and Middelburg.